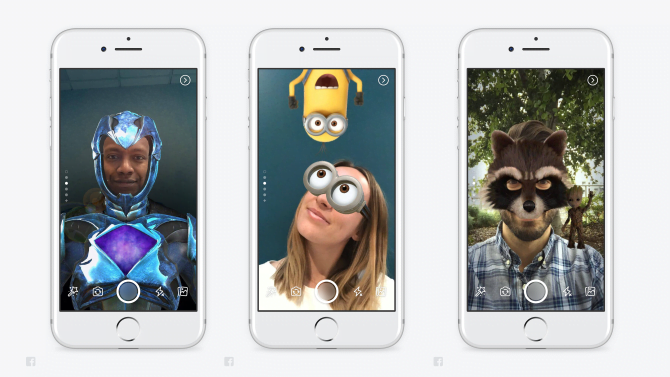 Facebook is enhancing its camera app with dozens of filters and effects, including selfie “masks” from six major Hollywood studios to promote current or upcoming releases, a la Snapchat. It’s also launching Facebook Stories, which lets users share photos and videos that stay up for a 24-hour period. That’s a feature Facebook-owned Instagram had already copied from Snapchat, followed by similar “stories” features in WhatsApp and Facebook Messenger.

And the third new Facebook feature mimics Snapchat’s original disappearing-message trick: With Direct, Facebookers can send photos or videos to their friends that will vanish after a short time. Just as with Snapchat, Facebook users’ friends will be able to view photos and videos sent via Direct once (with a replay) and send a reply.

The new Facebook in-app camera features will roll out starting Tuesday on its iOS and Android apps. To access them, users can tap on the camera icon on the top left corner of the Facebook app or swipe right from News Feed.

The movie masks are launching Tuesday in the camera, and will be available in Facebook Live on March 29. The initial masks are for 20th Century Fox’s “Alien: Covenant,” Universal/Illumination’s “Despicable Me 3,” Disney/Marvel’s “Guardians of the Galaxy Vol. 2,” Lionsgate’s “Power Rangers,” Sony’s “Smurfs: The Lost Village” and Warner Bros.’ “Wonder Woman.” In addition, Facebook is including guest art from visual artists like Douglas Coupland and Hattie Stewart with the launch of the new camera.

Other Facebook effects users can apply to photos and videos include “reactive” effects that let you interact with dynamic objects (like falling snow) and “style” effects, to apply an artistic filter to your video in real time.

In the main Facebook app, Facebook Stories will sit as part of a visual collection atop a user’s News Feed. Friends can view your story for 24 hours, as with Snapchat Stories. (Facebook Stories won’t appear on your timeline or in News Feed unless you post them there, as well.)