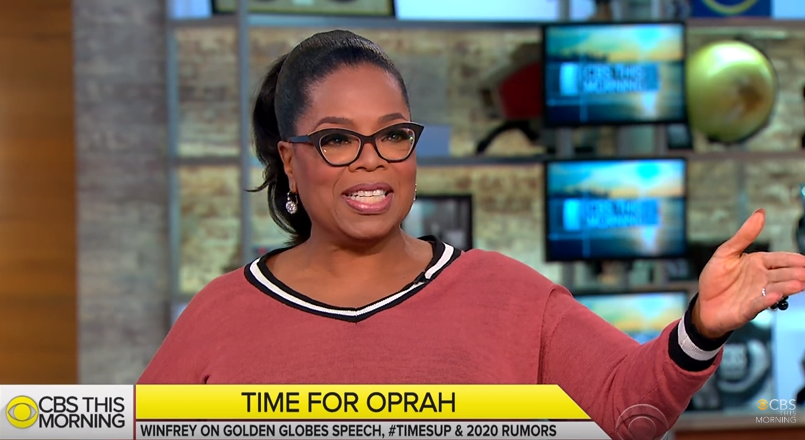 “Only Gayle can get away with bringing up this subject again!”  -Jodi

Jodi shares this Hollywood Outsider in the show podcast below. [starting at 13:49]

According to E News

Winfrey appeared on CBS This Morning Tuesday to promote A Wrinkle in Time (in theaters Friday), and confirmed that Gayle King was, in fact, one of many who had tried to persuade her to run for public office. Their initial conversation took place in Winfrey’s private gym in Maui, shortly before the annual award ceremony occurred. “Gayle goes, ‘Look, uh, I just want to talk to you about something. It’s not going to be good for you, but I think it would be good for the country,"” she said. “And I’m like, ‘Get out of here! I wanted you to come listen to the speech."”

The actress has already said politics are not in her “DNA,” later arguing that she has not seen any signs that she is meant to succeed President Donald Trump. “I believe that for everything that anybody does, there is a feeling—not just voices outside yourself telling you to do something—but there is a feeling that you have about, ‘Yes, this is the direction I should move in,"” she said. While she wouldn’t call that “grace,” she added, “I think it is an instinct; it is an intuition. I call it your internal guidance system, your personal GPS that says, ‘This is the way."”

King hasn’t accepted that Winfrey is uninterested in the job. “No one should be convinced to run for the presidency,” King admitted, “but I also think you have a very unique ability in terms of healing and connecting people.” In response, Winfrey said, “I have great compassion for people, I do, but I think you need more than compassion to be President of the United States.”

After the Show: Murphy gets a sweet suggestion from a listener who called in to help with his Type 1 Diabetes.