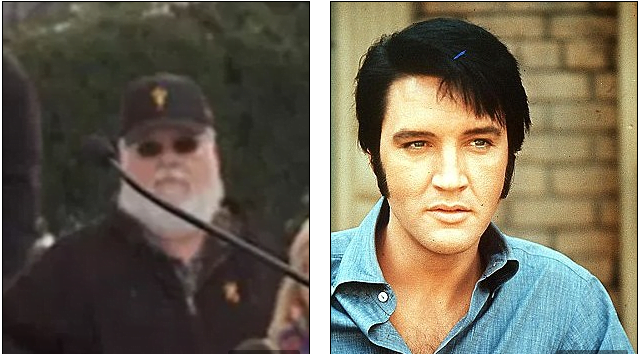 We’ve all heard the Elvis Presley conspiracy theory that the King of Rock n Roll faked his own death nearly 40 years ago, but now thanks to a new photo that has surfaced the rumors are running wild once again.

In fact, some people actually feel that the Kind is actually currently living within the confines of his mansion-turned-museum, Graceland.

A live stream shot at Graceland during this year’s 82nd annual birthday tribute to the King on January 8 has sent overzealous death hoax believers into meltdown mode. The Facebook group Evidence Elvis Presley Is Alive initially claimed one fan in particular — a heavyset, bearded man wearing sunglasses and a cap — who attended the event is actually the late legend in disguise, and the three men lingering in the background nearby are bodyguards meant to ward off any fans who get too close.

What do you think? Do you believe that Elvis could possibly still be alive and currently residing at his home? Or is this just complete nonsense?

CLICK HERE to see the picture image that started up the conspiracy theory once again.