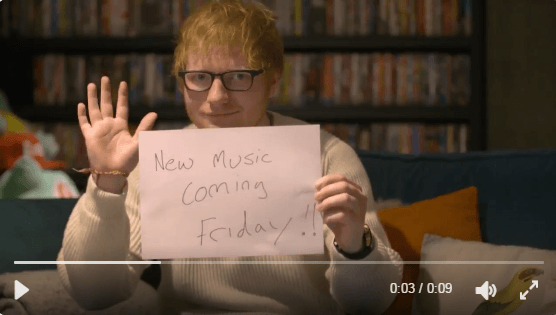 After a year of absence the ‘Thinking Out Loud’ singer will be returning on Friday (Jan. 6th) with new music. Sheeran took to social media earlier this week to tease his latest projects.

In a nine second video, Ed held up a piece of paper which read: “New music coming Friday!!”

The red headed superstar also posted another video with what we can only assume is a lyric from his new single:

When I was six years old I broke my leg…

And there is no confirmation as of yet but judging from another clip he posted, we believe the new album will be titled, ÷ (Divide).

In a 2015 interview with EW, Sheeran was asked whether – (subtract) and ÷ (divide) were potential album titles.

“They’re the two choices. But I don’t know what direction the album’s gonna go in yet,” he said. “Every title has its own theme. Multiply was called multiply because it made everything that was on plus bigger. From the venues to the songs to the radio plays to the sales. I don’t know what the theme on the next album is yet because I haven’t made it.”

These teases are a little tricky to fully understand but one thing is for sure; we are excited to hear what Sheeran has in store for his fans on Friday.