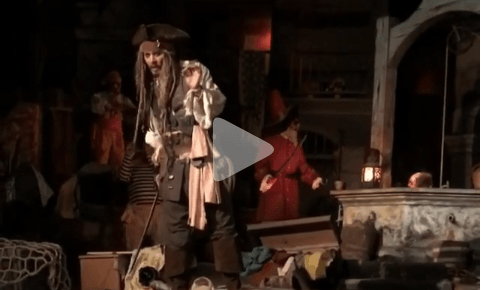 Johnny Depp got into character at Disneyland this week as Captain Jack Sparrow and it was a CRAZY good surprise for guests!

Can we put yesterday on repeat?! Seeing Johnny Depp on the actual Pirates of the Caribbean attraction as Captain Jack Sparrow was by far the best Disney experience we have ever had! We’ve had some great opportunities and experiences at the resort throughout our life time but this was by far our favorite experience, it beats going to #Club33 😂🙌🏻🙏🏻❤️ #JohnnyDepp #CaptainJackSparrow #JackSparrow #DeadmenTellNoTales #PiratesOfTheCaribbean #POTC #POTC5 #Pirates #NewOrleansSquare #Disney #DisneyParks #DisneyGram #Disneyland #DisneylandResort #DL #DLR #HappiestPlaceOnEarth #DisneySide #GetHappier #DisneylandAnnualPass #AnnualPass #AP #DisneylandCastMember #CastMember #CM #TheDisneylandTwins

It’s not everyday that you come to Disneyland and see Johnny Depp as Captain Jack Sparrow in the pirates attraction surprising fans and having their reactions recorded lol. 😂 Due to the popularity of this video and comments, we can’t respond but We give our consent to repost with credit to those of you asking. 📸 To everyone else asking, this wasn’t a known event. It was a surprise and yes Johnny Depp really did dress up as Captain Jack Sparrow and was talking to guests. They were filming boats interacting with him and we are thinking it’s new promo for the new Pirates of the Caribbean – Dead Men Tell No Tales film which is coming out May 26, 2017. This video was filmed Wednesday 4/26/17 °o° Thank you @evil_queen ❤️🙏🏻😘 #PiratesOfTheCaribbean #POTC #DeadmanTellNoTales #JohnnyDepp #JackSparrow #CaptainJackSparrow #Pirates #Disney #DisneyParks #DisneyGram #Disneyland #DisneylandResort #DL #DLR #HappiestPlaceOnEarth #DisneySide #GetHappier #DisneylandAnnualPass #AnnualPass #AP #DisneylandCastMember #CastMember #CM #TheDisneylandTwins

Johnny Depp surprised fans at Disneyland, by popping up on the “Pirates of the Caribbean” ride in his full Capt. Jack Sparrow costume.

The actor was waving his cutlass and talking to riders with his patented British slur on Wednesday night, not far from the animatronic versions of his character that appear throughout the ride.

Johnny Depp Is filming on the pirates ride in Disney land!!!! Crazy!!!!!! pic.twitter.com/Klc1QyEKzR

If you weren’t in the park on Wednesday, you’ll stil get to see a lot of Capt. Jack Sparrow this summer. “Pirates of the Caribbean: Dead Men Tell No Tales” opens next month.