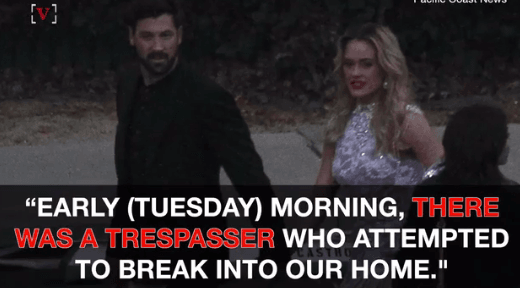 The weird reason someone broke into Maksim’s house in the middle of the night — the same night he voted off of DWTS this week.

“At like 2:20 I wake up, this loud knocking I come down there’s cops and they’re like there’s a dude outside that’s claiming this is his house.”

Chmerkovskiy said he believed it was an “ongoing thing with the ex-owner of this house” and said he showed his renter’s agreement confirming his right to occupy the property.

The dancer was noticeably absent on Good Morning America the morning of the incident, following his elimination from ABC’s dancing competition along with his partner, Heather Morris.

The former Glee star explained her teammate’s absence to the GMA anchors. “They had some sort of run-in with some man near their house trying to break in, but the police were there,” she said. “They took care of it. So they’re safe and Peta’s OK. That’s the most important thing…”

Drake Madison with the LAPD’s Media Relations department told USA TODAY via an emailed statement that the incident “was a civil dispute only.”

“There was no crime,” Madison stated. “Once it is determined to be a civil dispute only, it is not a police matter.”

When you subscribe to our podcast in the iTunes or Google Play store, you get exclusive stuff you won’t hear on the show!