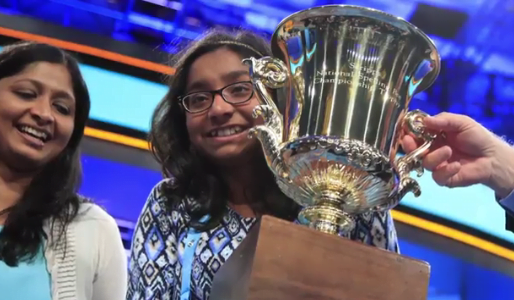 Ananya Vinay’s victory broke the bee’s three-year streak of ending in a tie.

According to USA TODAY:

Ananya, a 12-year-old sixth-grader, captured the championship title by correctly spelling “marocain,” which is a dress fabric made from silk or rayon, during the 36th round of the annual competition Thursday night. The second-place finisher was Rohan Rajeev of Edmond, Okla.

Ananya’s victory broke the bee’s three-year streak of ending in a tie. She wins $40,000 in cash, a trophy and other prizes.

“It’s like a dream come true, I’m so happy right now,” Ananya said upon receiving the winner’s trophy. “I just focused on my word and tried to spell it right.”

In a post-victory interview, Ananya told reporters she recognized one of the final words because it had been mentioned in her social studies book.